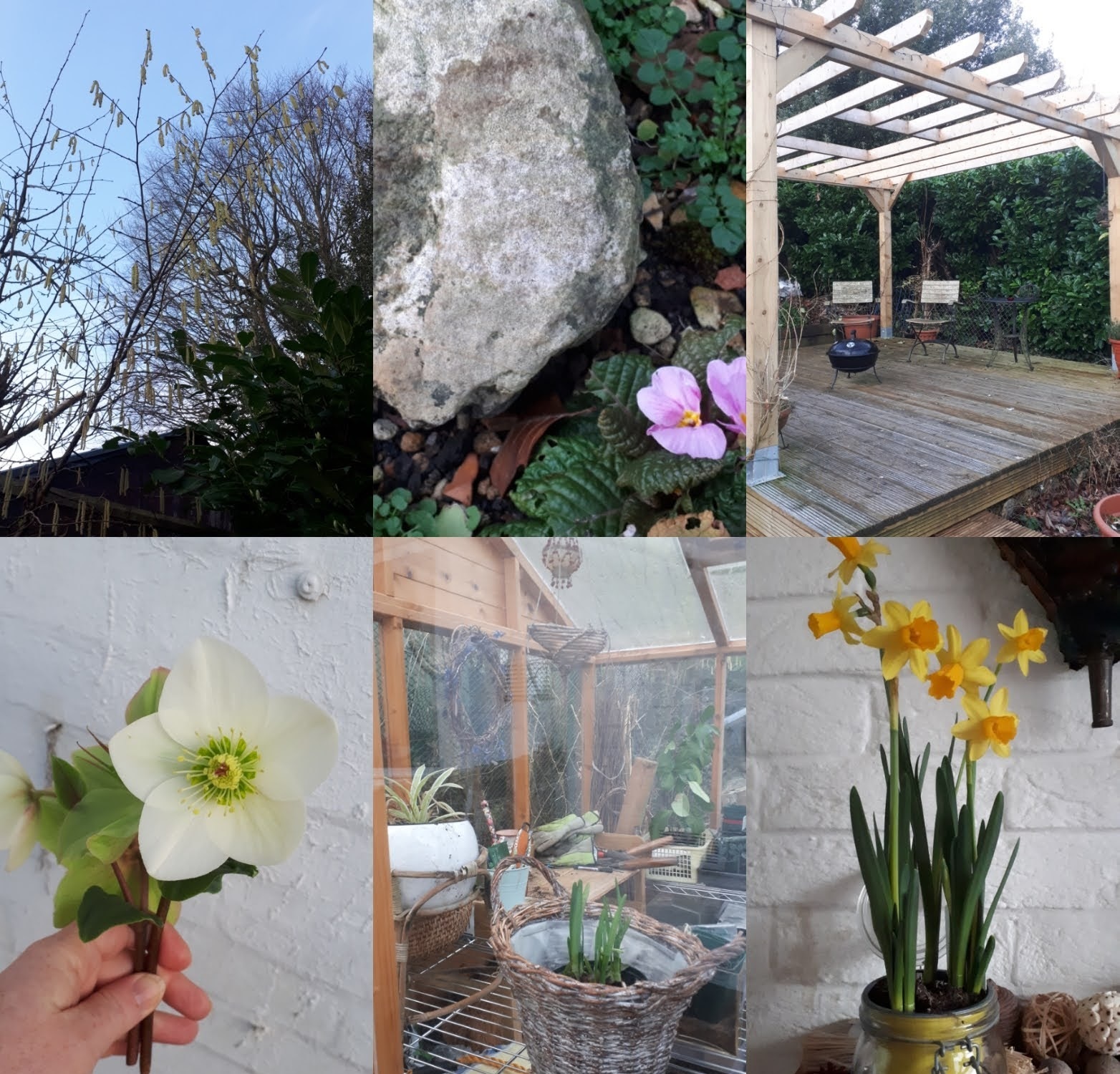 The Cailleach is the ancient Goddess who made the mountains of Scotland. Legend has it that on Imbolc, (1st February) she gathers firewood for the rest of winter. If it’s sunny, the goddess is gathering plenty of firewood, indicating there will be many more weeks of cold weather ahead.

Portrait of the Cailleach; by Anna Dorward

I’m personally guessing we’ll have a fairly chilly few weeks ahead, with occasional frosts until mid-April… Let’s see what happens.

And meanwhile, here’s six things in a suburban Somerset garden

First up, these bright hazel catkins. The birdsong here this morning was wonderful. I’ve seen dunnocks and goldfinches around the garden this week.

2. Primroses are starting to flower. The ammonite here emerged from the undergrowth, left behind by a previous gardener. It’s not an authentic fossil, it’s actually cast concrete, but its fairly convincing from a distance… The weedy ground cover is hairy bittercress, which is edible and has pretty little flowers so I’ll tolerate it here, until I can think of something better to put in its place.

3. I had my first cup of tea outside this week, sat on the deck under the new pergola. I didn’t capture a snap of that momentous occasion, but here’s where we sat. The deck is frosty this morning, but likely to tempt me out later when the sun comes round…

4. Hellebore gorgeousness. I’ve picked a couple of blooms to display in a tiny vase.

5. Greenhouse update: Still not much going on in here – I’m wary of growing seedlings too early to plant out, and don’t have much room, so it’s still just a few bulbs for indoor displays in the greenhouse right now…

6. Daffodils: I’ve potted up a few bulbs to brighten up the living room, and my darling husband bought me this pot of tete-at-tete daffs at the greengrocers…

He’s also planted out few dozen more daffodils into our new rosebed, while the cat enjoyed a sunbeam and the sofa to herself…

I’m enjoying the onset of spring. My great gran saw spring lambs as a sign that we’ve made it through another winter. I guess daffs do the same for me, although I am a bit peturbed that Spring flowers in the UK are blooming about a month earlier than they did 40 years ago.

But I’m holding off on sowing seeds for another few weeks, because the goddess has gathered lots of firewood, AND, celebrity groundhog Shubenacadie Sam, saw a shadow – predicting 6 more weeks of winter ahead.

For lots of garden highlights, visit the propagators blog for ‘Six on Saturday’

I hope your plans and plants are coming along nicely,

7 thoughts on “Six (more weeks of winter) on Saturday”